My eyes fill up with tears as I say goodbye to Anna who is also crying. We clasp hands and promise to stay in touch: she, inviting me to her family home by the Black Sea: me, inviting her to Toronto for a Canadian experience. We hug and reluctantly let each other go. As I walk through the doors I turn around and we give each other a final wave, smiling and blowing kisses.

Five days ago we met for the first time when I landed at the Moscow airport. She was assigned to be my “guide” to help me navigate Moscow and to be my translator for the duration of my stay. I was invited to the Moscow Global Forum to present a session on Sketchnoting, along with 47 other international speakers.

It was the trip of the lifetime. I fell in love with Moscow; its culture and its people, and I made many new international connections and friends. As I sit at the Moscow airport ready to board my flight home, I reflect on how magical this Russian experience was.

Moscow is, beyond a doubt, one of the most beautiful cities I have ever visited. There is breathtaking architecture, huge boulevards, many statues and parks, the Moskva River which winds its way through the city, the magnificent Moscow Kremlin and Red Square, and many charming pedestrian-only cobblestones streets like the famous Arbat Street. 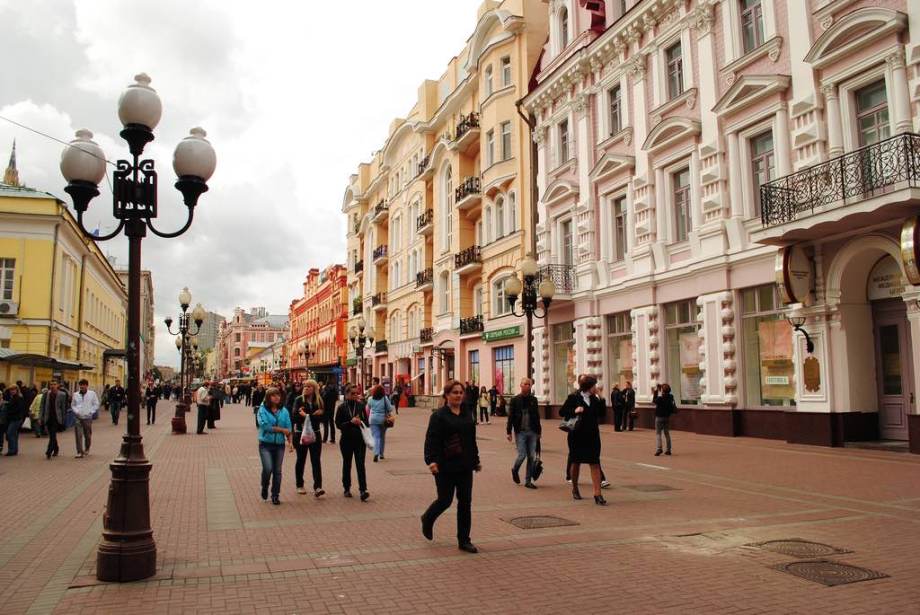 I was astonished with the vastness of the streets, buildings and monuments. The Russians clearly like to do things in a big way! 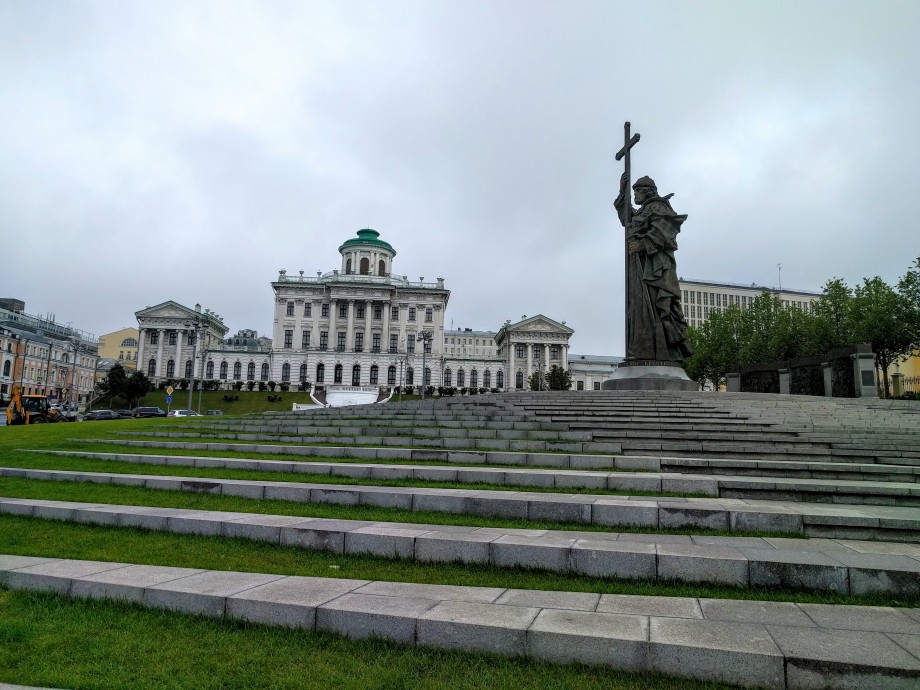 (Statue of Vladimir the Great)

I was also struck with the cleanliness of the city. Early in the morning an army of cleaners descend on the streets, picking up garbage and sweeping by hand every piece of garbage in sight.

The morning after I arrived, I went for a long walk along the Moskva River all the way to the famous Gorky Park. 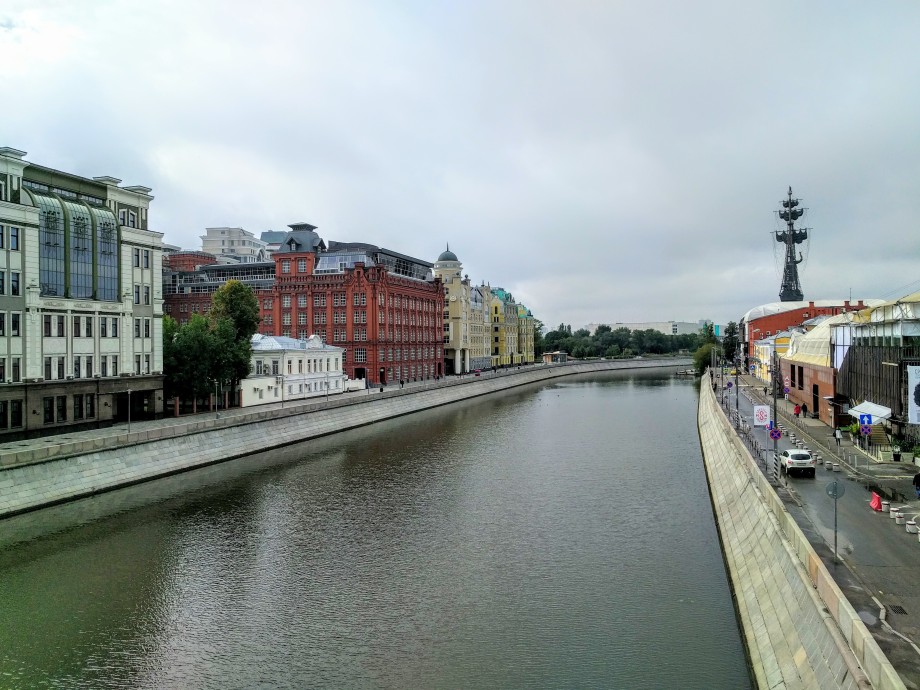 The city is great for walking, with many underground tunnels that go under the wide boulevards which allows for the traffic to flow more freely throughout the city. Even so, the traffic jams in Moscow are epic and I was surprised to see so few cyclists. I saw a beautiful bicycle path along the river, but in general there seems to be a shortage of bicycle paths in the city. However, the subway system is one of the best in the world, with 200 stations bringing millions of Muscovites in and out of the city every day.

Russian food includes much smoked fish and meat, fresh vegetables and fruit, hearty bread and delicious cheeses. I particularly like the traditional dishes like borscht, dumplings, and caviar with pancakes and sour cream. The Russians serve many courses in a formal meal and we had to learn to pace ourselves so as to leave room for all of the courses. Our hosts told us that in Russia, it is considered polite to leave food on your plate because it indicates to your host that they served a sufficient amount of food. This was certainly not a problem for us as every meal we were served was humongous! (Click here to learn more about food etiquette in Russia.) 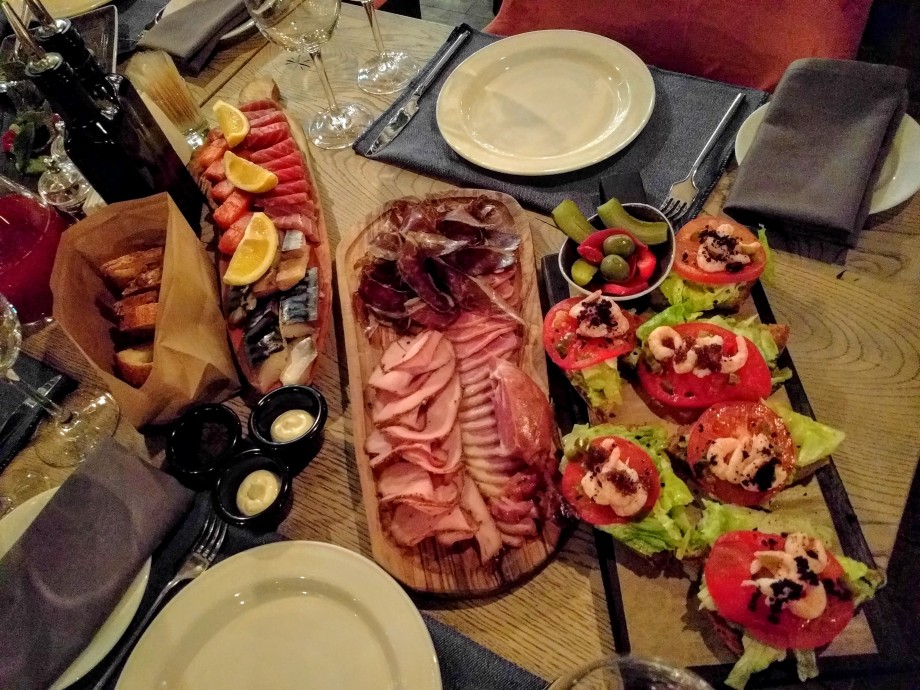 The inaugural Moscow Global Forum was one of the best organized conferences I have ever attended, with 20,000 delegates. The highlight of for me was participating in a Question and Answer session where we were able to share our areas of expertise with the audience in  mini-sessions of 10 minutes. The moderator had prepared many excellent questions to keep the discussion moving at a fast pace. These sessions gave us a chance to get to know the other presenters and to ask them questions about their outstanding work. Another highlight for me was getting to meet Luis Von Ahn (creator of Recaptcha and Duolingo) after his keynote. Read more here about his brilliant idea to help digitize books through crowd-sourcing the word recognition feature in Recaptcha. 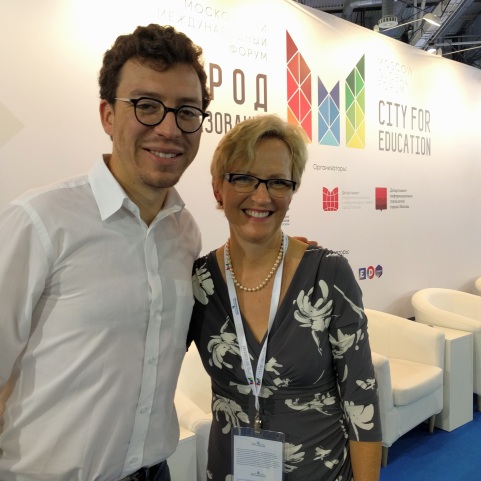 Our hosts treated us like royalty as soon as we arrived in Moscow, greeting us at the airport and organizing and accompanying us on many excursions during our stay. We were each assigned a personal guide to facilitate our trip and to make us feel welcome in Moscow. These guides were delightful young students or recent graduates who were hired for the conference.

My first excursion was to School No. 627. I had missed seeing the full school day in action but was able to visit the after school program: small classes engaged in various after school activities. It was a happy, welcoming atmosphere and the students were excited to try out their English on me. 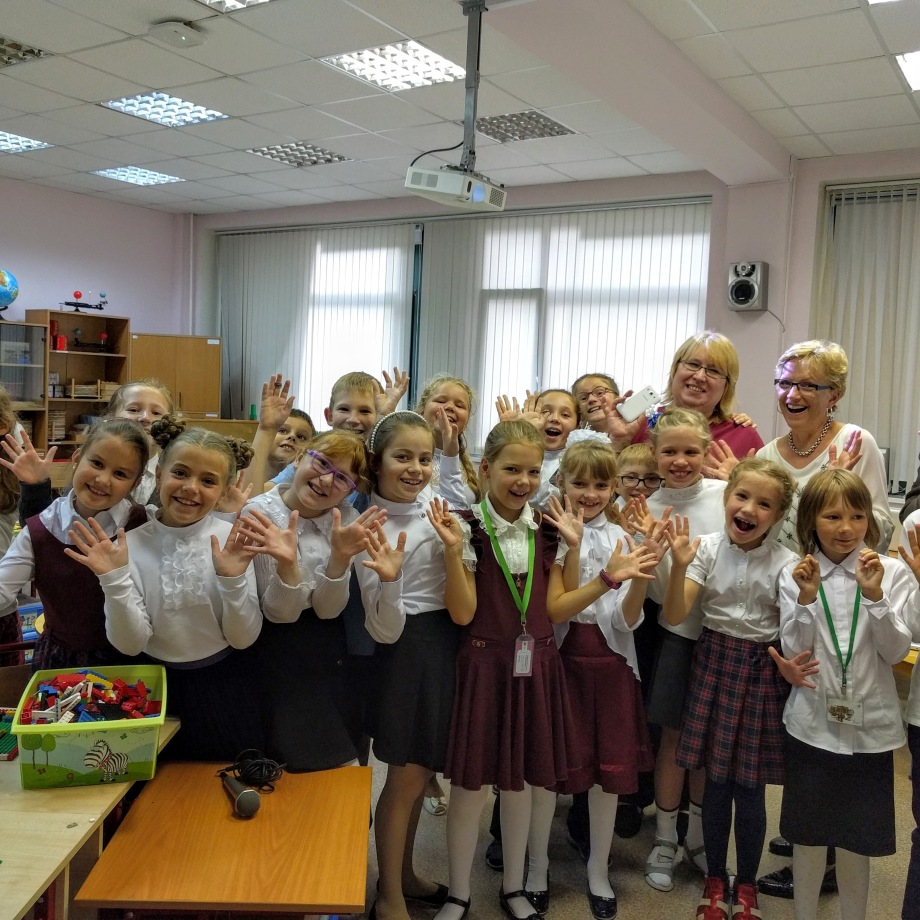 Over the next two days our group had two walking tours: one of central Moscow and the other one of The Kremlin. It was obvious that our guides had tremendous pride in their city and they were extremely knowledgeable about the history of Moscow, spanning 870 years. The information was a little overwhelming, but I was glad to learn about the many wars, fires, and religious and political transformations the city has been through. 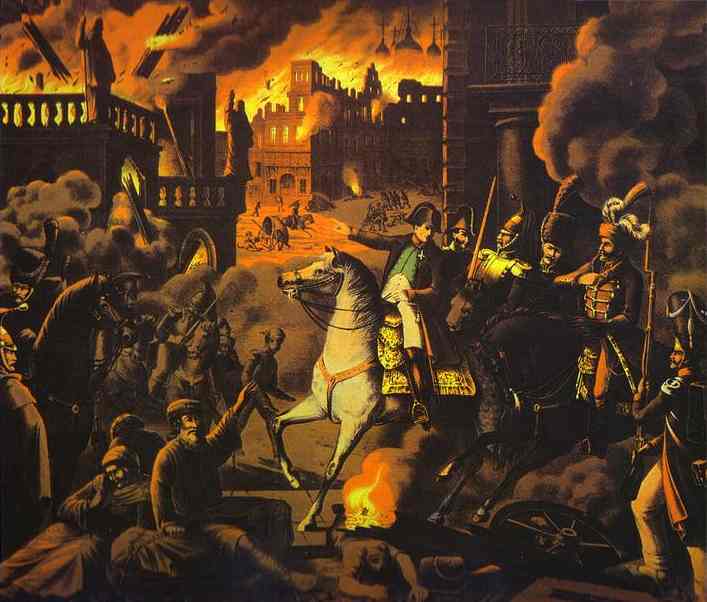 There is a vast number of museums in Moscow. We visited the Tretyakov Gallery to see an astonishing collection of Russian masterpieces spanning several centuries. I was particularly taken by the story behind “The Unequal Marriage” by Vasili Pukirev. Click here to read more. 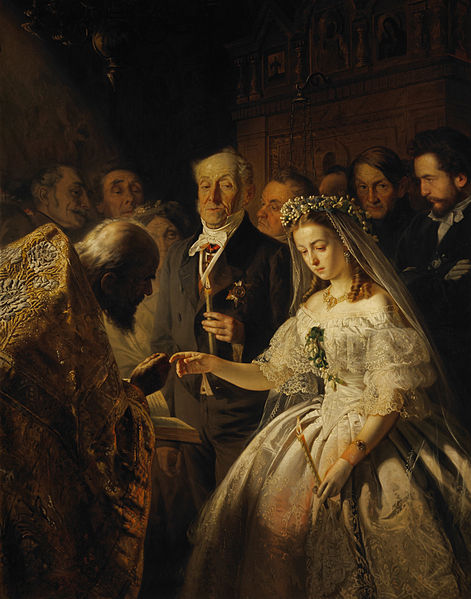 One of my favourite excursions was the glamorous dinner cruise on the Moscva River. The food was exquisite and seemed to never end (I counted 9 courses!) accompanied by a live band that played traditional Russian music. 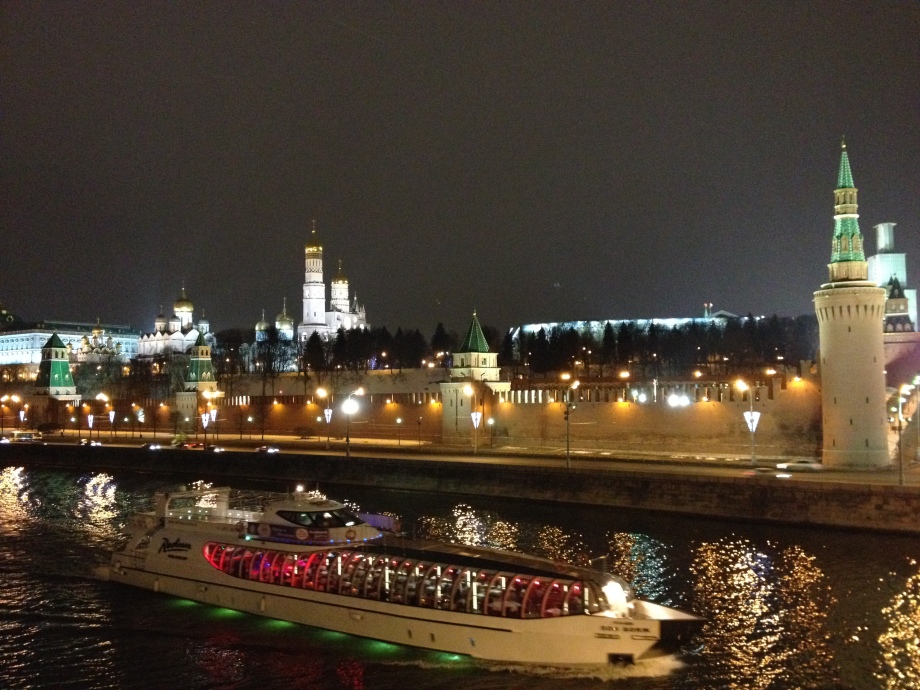 Our final dinner was at the Carlson Restaurant, one of Moscow’s finest eating establishments. We were treated to another multi-course feast of mouth-watering food, wine, and Russian vodka. We rolled out of there, busting out of our seams and marvelling at the vast quantity of food served at every meal.

Our visit to Moscow coincided with a celebration its 870th birthday. On the weekend there were many live performances on huge stages set up around the city.

The police, security guards and army presence was significant and buses were set up at the ends of busy streets to prevent terrorist attacks. All citizens had to go through security screens before entering the city centre. 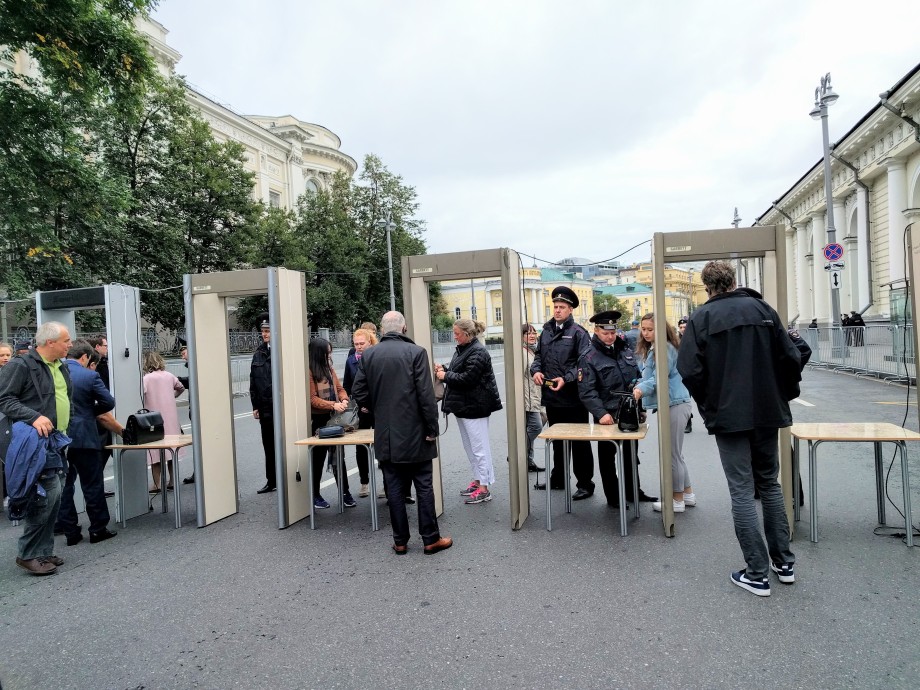 The security forces were very thorough and it was obvious that they took their jobs very seriously as they rarely cracked a smile. The civilians seemed to take this all in stride, but even our guides said that they had never seen this level of security for an event in Moscow before.

I was impressed with the level of organization and coordination required set up all the checkpoints which reinforced my sense that Russians have a highly developed command system and infra-structure to pull off security in this grand scale.

Moscow has a population of 12 million and it seemed to me like most were in the city Saturday night. By the time we got back to our hotel (the Ritz-Carlton), we were a little frazzled so a night-cap on the roof-top terrace seemed in order.  Sipping on Moscow Mules while watching a magnificent display of fireworks was just what we needed to end the night in a magical way.

I love connecting with other educators on social media, but there’s nothing like face-to-face interactions during conferences to have those deeper levels conversations about important issues in our profession and to get to know each other on a personal level. The international presenters were a diverse community, representing 20 different countries, cutting across many different types of educational institutions. It was fascinating to compare notes about the similarities and differences between our school cultures and to exchange ideas. I was in awe of the passion that each educator displayed towards their students’ well-being and their commitment to creating inclusive school communities. Throughout the afore-mentioned boat cruise, many toasts were made by the presenters and hosts and the overriding theme was the importance of communication, collaboration and idea-sharing. But above all, there was a unified call for world peace.

It’s hard to accurately describe the extent of the hospitality that our hosts extended towards us. When Anna first greeted me at the airport and ushered me into a private car, I knew that that this was going to be a special experience. Throughout the 5 days I was there, Anna barely left my side. She was like a mother hen, always making sure that I knew where to go and that I was in time for my next appointment. All of the other presenters I talked to said that their guides were equally lovely and conscientious.

On our last day in Moscow after the Kremlin tour some presenters and I decided to go for a walk around the city. To our immense surprise and delight, our hosts asked to join us, even off-duty! Later in the day we had a delicious dinner at the famous Ukrainian restaurant, Tarus Bulba, (across from the magnificent Russian State Library) and were again regaled with live music.

Over dinner that night, our hosts explained to us the strong sense of hospitality that Russians have. They described how even families who do not have many luxuries will forego feeding themselves so that their guests can have the very best of what they can offer. Our hosts embodied this sensibility along with a fierce sense of pride of their history, culture and country. Their warmth, sense of humour, compassion and generosity reached into our hearts and took hold. We will never forget our new friends and we will be forever grateful to them for making us feel so special.

(A huge спасибо to the organizers of the International Presenters program: Diana Obukhova and Nastya Ivanova. This event could not have happened without their tireless efforts!)